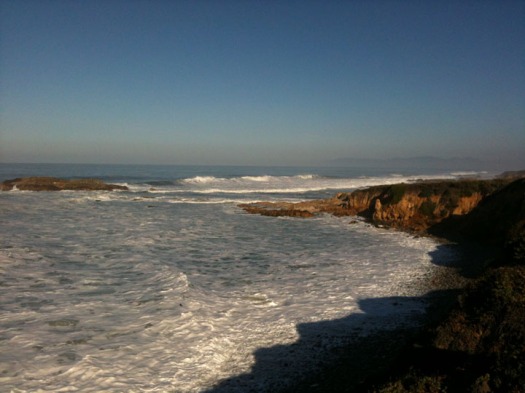 To my knowledge, no one has ever swam to Bolinas from San Francisco’s Land’s End and lived to tell about the experience. It is conceivable that no one has ever attempted the feat. Named “Land’s End” because that is exactly what it is – the northwest corner of the San Francisco Peninsula ending at the intersection of the Golden Gate, the entry into San Francisco Bay, and the not so frequently pacific Pacific Ocean. The ocean collides, often in extreme turbulence, with the drainage of California’s gold country rivers from the Sierra Foothills into the world’s largest estuary – the San Francisco Bay. Tides rise almost eight feet during extreme alignment of the sun and moon. The water is a numbing 48 degree average with currents running south from Alaska and the Pacific Northwest. Sailboats stall struggling against the currents and the eighteen-knot average winds, the 8th highest average velocity in the United States. Large ships carefully have to navigate the separation of two masses of land, Marin County on the north and San Francisco on the south, often shrouded in fog so thick you cannot see your hand in front of your face. Dozens of shipwrecks running aground against the rocks and the sandy shoals have been recorded. Great white sharks troll the shallow sandy reefs along the coast from Ocean Beach at the west end of San Francisco, to Muir Beach, Stinson Beach and Bolinas north of the Golden Gate. It would take a herculean effort to accomplish swimming to Bolinas from Land’s End. It may be impossible.

San Francisco, a real live OZ with its own yellow brick roads, fantasy characters and dream-like existences, is the apex of this story where I will let you be in my dream. Bolinas is a dream all its own. A small village of bohemians and hippies located on the San Andreas earthquake fault several miles northwest of San Francisco. Bolinas is literally slipping northwest at a rate of about three inches every couple of years. It used to be 800 miles south near San Diego a several million years ago. San Francisco careens into the future at a pace unmatched anywhere in the world creating a utopian bubble that has spawned some of the more significant historical epochs that have created and changed the world. It has picked itself up in the fashion of Phoenix after being destroyed at the end of the 19th century and will undoubtedly have to do so again one of these days.

It started with Fred & Grace. A genetic collision of handsome young descendants of Germanic origin. Little Freddy, the fifth Frederick in a row, was born in late January at the beginning of the baby boom era. Fred & Grace were older parents in that they were born early in the 20th century before the Roaring Twenties, enduring the Great Depression, and surviving the Second World War. I was conceived and welcomed into the industrial environment of bessemer and cold rolled steel where the patriarchs of the family worked. My grandmother and mother were homemakers who lovingly raised my sister, cousins and myself, but they were incorrigible in their own right. Nanny, my maternal grandmother, had a small speakeasy bar in her basement. The parish catholic priests and monsignor would come over and play cards and have drinks. There was a dirt wine cellar with “daygo” red wine. Nanny let my sister pick the numbers for the “numbers game” lottery she ran. Mom and Nanny were irreverent yet devout catholics and they found salvation for their lives by going to mass and confession, and entertaining the priests at home.

Grace was middle aged when I was born and my energy proved to be challenging for her. She forged my baptismal record to get me into catholic grade school a year early, and presumably to get me out of her hair. There I was a year younger and less mature than my classmates. Pity for them and the Sisters of Notre Dame who even with their disciplinary tendencies had a hard time making me learn, let alone sit still for all of the classes. On Thursday morning, as in many catholic schools then, we had to go to mass before school. If you did not attend mass, a note was required from your parents. Well, one morning in the sixth grade I said to Grace at 7am, “I am not going to mass this morning, can I have a note?” “Sure”, Grace responded, and sat down and wrote a note, folded it up and sealed it in an envelope. Grace had already started drinking at that time. When I arrived in class that morning, the nun said “Freddy, where is your excuse for not being in mass?” I handed the nun the envelope Grace had given me. The nun opened it, read the note, folded it back up and put it back in the envelope, came over to me and grabbed me by the hair and the back of the shirt and dragged me out of the class room down the hallway to the principals office. The nun and the principal called my mother and told her to come and get her son that he was expelled. Hurray! No more catholic school. The note read, “Dear Sister, Freddy didn’t go to mass. If you don’t like it, you can kiss my ass.” signed – Grace Hahne.